Parkin is an enzyme in cells that tags outer membrane proteins on damaged mitochondria and thereby sets off repair or recycling of the damaged mitochondria. Mutations in the parkin gene which make it dysfunctional cause Parkinson’s disease in humans, suggesting this enzyme is key for keeping susceptible cells healthy. Accordingly, increasing levels of parkin protects against models of disease in several animal species, from fruit fly and worm to non-human primates and human cells.

To maintain homeostasis, there are always opposing forces in living cells. An opposing enzyme to parkin is USP30, which removes the tags attached by parkin and slows the repair and recycling mechanisms. In fruit flies, decreasing USP30 can offer protection against mitochondrial dysfunction.

We look to translate these breakthrough discoveries to human medicines by activating parkin or inhibiting USP30 using small molecules. 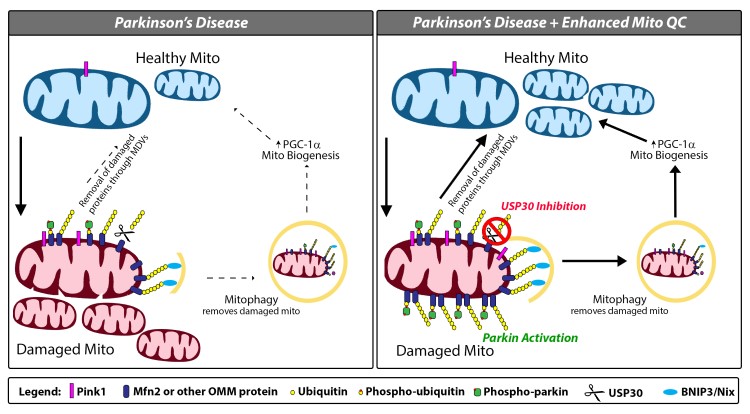